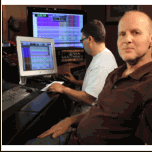 When I lived in Northern Virginia, I had the honor of being introduced to the world of music producing and audio engineering by an expert in the field. Jim is knowledgeable about all phases of producing a great recording. He taught me the techniques of recording, mixing and producing in his studio at Cue Recording Studio in Fairfax, Virginia. It was a great experience watching him do his magic.

Music Producer, Jim Ebert started his musical career at the age of twelve with a Micromoog synth and a Wurlitzer electric piano. After playing the worst version of ”Smoke On The Water” for the five thousandth time, Jim discovered music was going to be his life passion. As a guitarist, vocalist and keyboardist, Jim gigged regularly in the DC area from age 15-21. At 19 he took on the burden of recording his own band and stumbled upon where his true musical gifts lay was in the studio.

Jim sharpened his talent as chief engineer of Cue recording (VA). Every day was something new at Cue, from recording HR of the Bad Brains to Buddy Miles, it helped nurture his diverse style. After the success of the double platinum album “If I Ever Fall In Love Again”, Jim’s mixing reputation grew, and so Jim relocated to Los Angeles, CA. Mixing became Jim’s main focus and led him to work with such artists as Ice Cube, Madonna and Toni Braxton. Though Jim was in great demand in the R & B world, he could not get away from his true love, ROCK! So in 1966, Jim decided to work exclusively with rock artist, starting with Jason Falkner’s Solo debut. From there it just rolled on………

Jim now resides on the east coast in the Washington, D.C. area. Jim works with indie, major label and developing artists as a producer and mixer. Jim also shares his passion for music by teaching recording, mixing and producing in small groups and one on one. Check out Jim’s teaching page for more information.

Jim Ebert in the Red Room